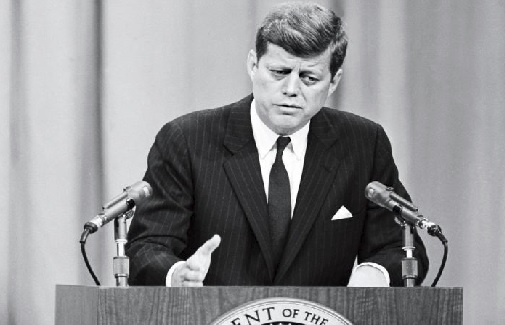 In 1961 Under the Kennedy Administration during the Cold War, in 1962 J.F.K. wanted to defeat the Communists and saw how the media, and music could influence society politically. He started a covert operation to investigate this and come up with a plan. The investigation concluded that one of many outcomes, or a combination of outcomes could happen.

They were already seeing the Communists infiltration of the folk music movement with the rise of left leaning folk singers Woody Guthrie, and Pete Seger. This was a grass roots movement that would be difficult to manage, because instead of one or two more popular acts there could be hundreds of folk singers with the same message sharing songs.

Another outcome would be a Non-Communist singer would become very popular, then seeing that ability to invfluence society would become Communist and influence society to start a revolution. In essense this is what happened later with the Beatles, although John Lennon distanced himself from the violent aspects of Communism, the Beatles heavily influenced the youth, and were against the Vietnam War.

Yet another outcome would be actual Russian agents who are trained in music, and lyric writing that could pose as American songwiters, or even singers themselves. This led to the idea that U.S. Agents could recruit song writers, and musicians for thier cause.

To learn more HTML/CSS, check out these tutorials!